Performative Memorialization of the Ainu People within Japan

Most people or scholars view indiginous populations as peoples and traditions of the past. The contemporary belief is that while the history of indiginous peoples should be celebrated, the tragedies they have endured should not be forgotten. However, monuments, memorials, and museums that memorialize the Ainu people of Japan are strictly positive and celebratory in nature. In this digital exhibit, I argue that while these memorials honor Ainu traditions and culture, they do so in a performative manner that dismisses the past harm by the Japanese government that has been endured by the Ainu people. 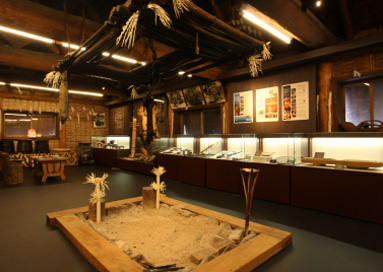 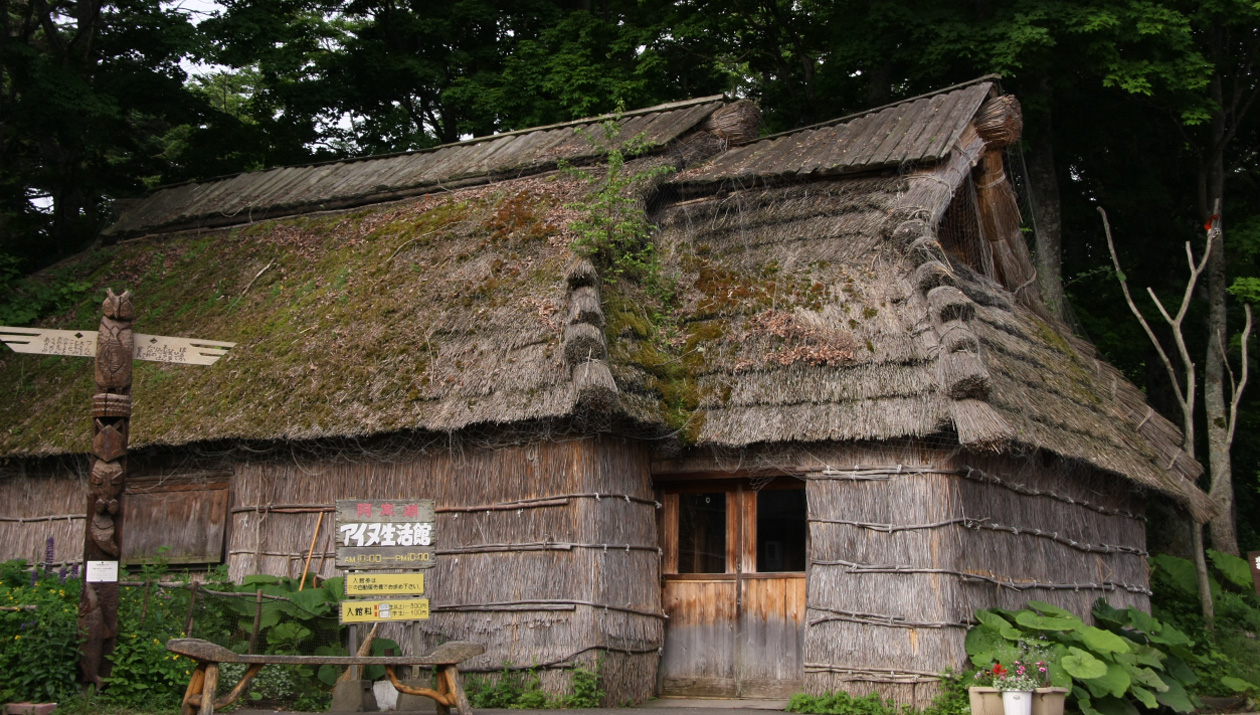 The Poncise (“small house” in the Ainu language) Ainu Living Memorial Hall, located within the Akan Mashu National Park of Hokkaido, recreates a traditional Ainu home of four-to-five residents. The museum is structured in the manner in which a traditional Ainu hut would have existed, and displays of items, clothing, and tools on the inside of the building provide an insight into the historica daily lives of the Ainu people.

Though the Poncise Hall allows visitors and viewers a sense of authentic insight into Ainu lifestyle and traditions, like the statue of Shakushain, the museum represents selective memorialization. The exterior illustrates the ways in which the Ainu people relied on local resources for protection against natural elements, the clothes paint a picture of what the Ainu wore, and the tools provide insight into the crafty nature of the people, but little acknowledges the pain and struggle of the Ainu people in regard to their way of life. Beginning in the Meiji era of Japan (1868-1912), the Japanese government’s assimilation policies “prohibited [the] speaking [of] the Ainu language,” which “completely changed the hunting, gathering, and fishing lifeway” of the Ainu people ("Ainu Living Memorial Hall." Not only were the Ainu people subjected to discriminatory policies that attempted to stript them of the language they had spoken for centuries, but forced them to change their lifestyle and ways of interacting with other populations. However, once again, the memorials are strictly commemorative and celebratory in nature. Simply visiting the museum would not lend to visitors’ greater understanding of the discriminatory policies that led to an end to the Ainu pepole’s traditional lifestyle. 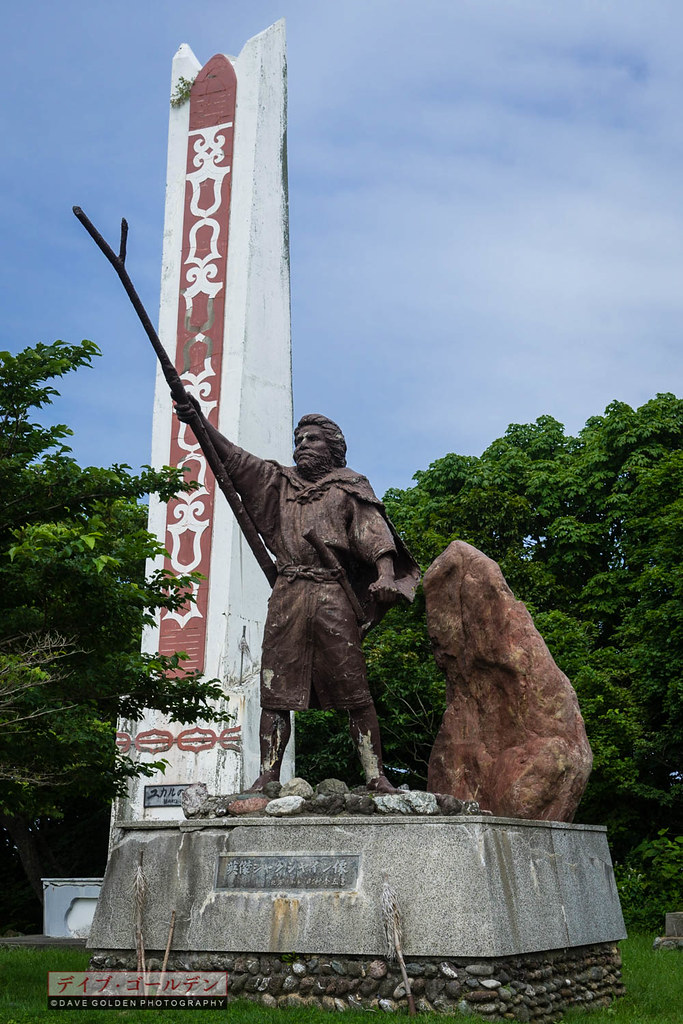 This statue of Shakushain is located in Mauta Park in Shinhidaka, Hokkaido, Japan. Shakushain was a leader of the Ainu people in the mid-to-late 17th century who led a revolt against the Yamato people/Japanese government. The revolt represented the final attempt of the Ainu people to regain political and trade independence of the Hokkaido region. The metal statue of Shakushain is placed at the location of where the Ainu Shibechari Fortress once stood, and stands roughly 20 feet above a stone and cement foundation that holds a plaque detailing Shakushain and his life.

The memorial commemorates Shakushain, but does so in a way that dismisses the historic struggle of the Ainu. As aforementioned, the official colonization of Hokkaido and the Ainu peoples did not occur until the “second half of the nineteenth century”, but the Ainu had still endured years upon years of struggle (Bukh 35). Even before expansion by the modern Japanese government, the Ainu were subjected to the ethnically Japanese peoples of Hokkaido and various samurai clans. However, upon first glance of the Shakushain statue, one could easily misinterpret the significance of the battle. The triumphant pose of the statue leads a viewer to not only initially misinterpret the Shakushain and the Ainu as the victors of the battle, but dismisses the significance of the reality (defeat) as well. Though Shakushain led the Ainu people in a three year war, ultimately, he and the Ainu people were defeated. After nearly a century of on-and-off conflicts between the Ainu people and the dominant Japanese peoples, the last battle represented the final attempt of the Ainu to regain their independence. What followed were centuries of discrimination and policies of assimilation that aimed to strip the Ainu people of their identity. Though the memorial aims to memorialize Shakushain and the Ainu people, the pose of the statue not only detracts from the past and what Shakushain was fighting for, but the future implications of the defeat as well. 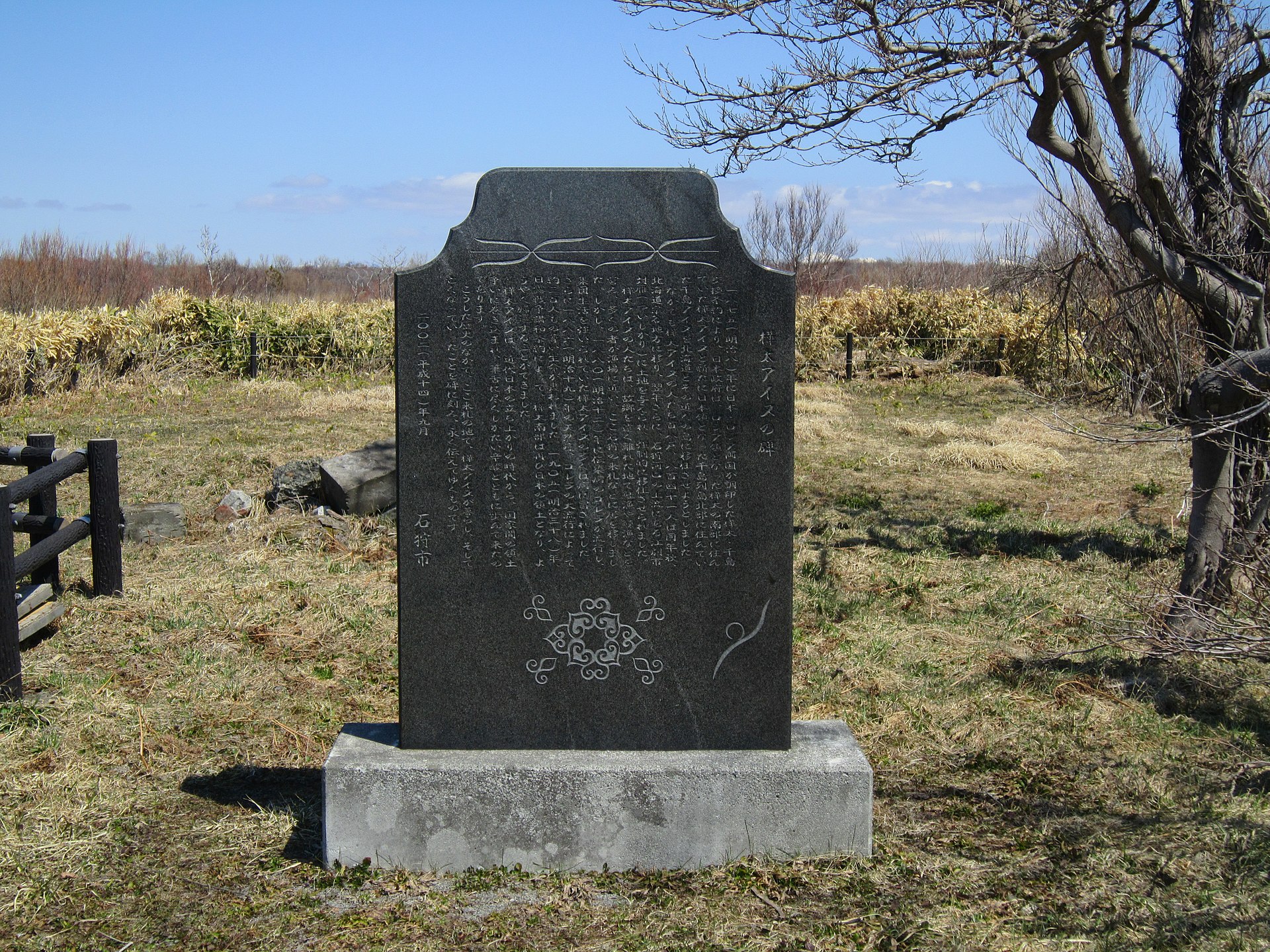 This cenotaph memorializes the Sakhalin (current Russian island) Ainu people, is made of granite, and stands 5 feet tall and 3 feet wide.

With the “geopolitical interests” of the Tokugawa Japan and Russian Empire conflicted beginning in the latter half of the eighteenth century, the Ainu were once again at the center of a dispute (Bukh 35). The Japanese government considered all Ainu as Japanese, regardless of their region of residence, so felt threatened by Russia’s expansion attempts and potential Russian influence on the Ainu people. The dispute continued and ultimately led to Russia claiming control of both the Sakhalin and Kuril islands post World War II, which were inhabited by many Ainu peoples. However, Russia deported all but 100 of the Ainu living on the Sakhalin and Kuril islands to Japan, all but erasing Ainu culture on the (now) Russian islands. With this history in mind, the cenotaph appears to acknowledge the Sakhalin and Kuril Ainu people who endured such tragedy. Unlike the past two memorials, this cenotaph acknowledges the historic struggles and tragedies of the Ainu people. However, from an Ainu perspective, it still dismisses an important notion: Ainu sovereignty and rights. As Bukh notes, the Japanese government views the Soviet Union as thieves of the northern islands. However, as he also notes, many Ainu and Ainu activists oppose this notion and argue that, in fact, “Japan… was the aggressor that initially stole the territory from the Ainu” (46). The Japanese viewpoint overlooks the history of Japan’s relations with the Ainu people and the past harm it is responsible for. 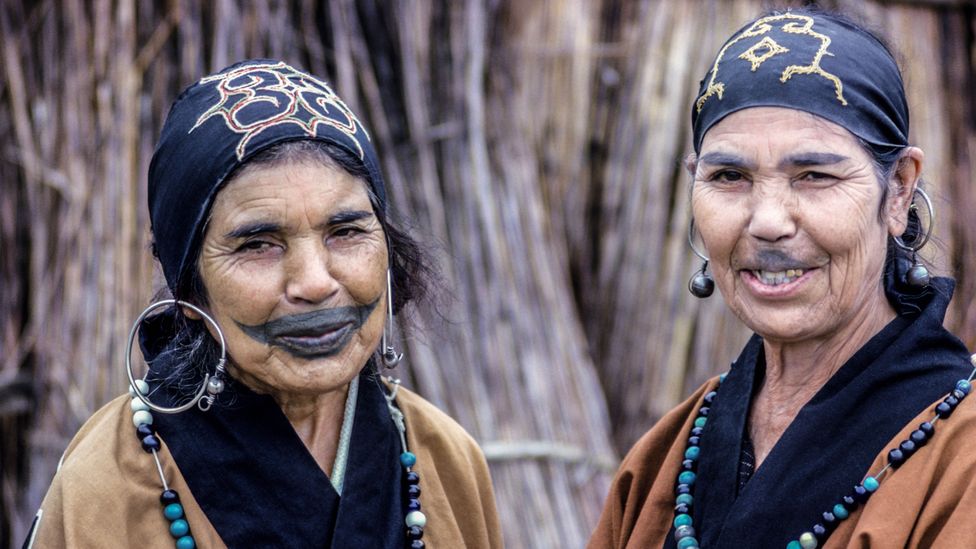 Ultimately, though memorials, statues, and museums exist to memorialize the Ainu people and their history, they are done so in commemorative manners that elicit positive connotations. Olson’s second point in the preface of “Constitutive Visions” argues that “U.S.-based interpretations of [indigenous] contexts are in debt of [indigenous] interpretations” (xvii). In a similar fashion, but in Japanese terms, the memorials, many of which are built by official Japanese entities, memorialize the Ainu from a Japanese perspective, as opposed to an Ainu one. Not only do they tend to commemorate the traditions and cultures of the Ainu instead of serving as education of the historic harm endured by the Ainu people, they place the Ainu in a Japanese context as well. The very existence of a need to memorialize the Ainu represents a “symbol of Japanese aggression” (Bukh 46). Given decades of Ainu activism for rights and recognition as an indigenous people with little success, the commemorative memorials, statues, and museums erected by the official Japanese entities can be accurately described by one word: performative.