Cam Ai Tran and Hap Tu Thai and their two children escaped Vietnam by boat in 1979. Thirteen others on the same boat died and were buried at sea. Tran and Thai are now the publishers of the “Saigon Times”, based in Rosemead, California. For ten years they worked tirelessly to build a memorial to the Boat People, including the tens of thousands who died at sea. In the Spring of 2009 the Vietnamese Boat People Monument was dedicated in Westminster Memorial Park’s Asian Garden of Peaceful Eternity. 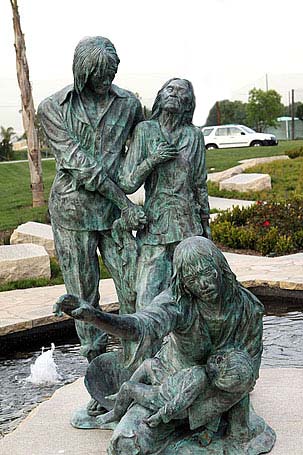 During 1975, as a U.S. Naval Officer stationed in the South China Sea, I witnessed a small part of the human drama of the Vietnamese Boat People. It was not an easy thing to see – an impossible thing to forget. With the fall of Saigon on April 30, 1975, hundreds of thousands of Vietnamese crowded into every type of boat imaginable and fled their homeland. This exodus continued for years. They sailed towards Malaysia, Thailand, the Philippines, Hong Kong, and Indonesia. They sailed on overloaded vessels, many boats totally ill-equiped for the open ocean. Most refugees were rescued – initially moved to relocation camps in Asia, and eventually resettled permanently in strange countries of the Western World – the United States, Canada, Australia, the United Kingdom, Germany, France, Israel, and others. For thousands of Vietnamese refugees, however, their journeys ended in death – their bodies scattered on the ocean floor of the vast expanse of the South Pacific.

The monument contains four statues on a slab within a pool, the slab resembling a raft. The figures on the raft are of a man, an older woman, and a younger woman holding a young child.