It is believed that indigenous people have occupied American lands for over 20,000 years, far before Christopher Columbus or any European stepped foot onto American soil. This time away from European influence saw the emergence of thousands of indigenous cultures and tribes all complex and different in their traditions and ways of life. It was the intrusion of Europeans that decimated and dismantled these indigenous tribes and culture, yet in honoring the memories of these very tribes, historians feature European-centered information to highlight the site's significance. Most people or scholars assume that Native American’s memorial honor indigenous people while giving insight into their daily lives, however, these monuments show us that Native American history is presented through the context of European connection or influence, not simply the native tribes in their own respect.

There are three different types of memorials presented in this exhibit, yet all contain some indicator of European influence on the tribe the memorial is supposed to be honoring. Not all memorials use European-center information to honor Native American tribes, but it can not be ignored that a widespread amount of space on native American monuments has been used to describe the native Americans' connection to European colonizers. 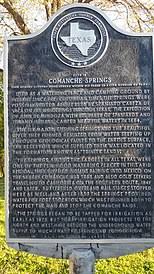 The site of Comanche Springs in Fort Stockton, TX was used as a watering place and camping ground by Native Americans since Pre-colonial times, but as quickly pointed out by the plaque honoring the Comanche Springs, the spring was possibly visited about 1536 by Spaniard Cabeza de Vaca on his wanderings through texas. The plaque also highlights another European Spaniard Juan de Mendoza with his party of Spaniards and Jumano Indians who camped near the waters in 1684. The six major gushing springs and the beautiful river they formed resulted from water seeping up through geological faults to the earth’s surface. The springs served as a watering place for Indians raiding into Mexico on the nearby Comanche war trail and for the gold seekers traveling to California on the southern route, 1849 and later. The springs began to be tapped for irrigation as early as 1875, but today irrigation projects to the north and west have reduced the underground water supply so much that the springs no longer flow. The Nisipowinan Village, an official California state park located in Sacramento, California is the location of the largest Indian Village and cemetery of this region. Instead of discussing the history and culture of the Indian village, Information on this site explains that the Nissenan tribe occupied the land upon the arrival of John Sutter, the Swiss Immigrant who built a fort and working plantation-style ranch adjacent to the tribe. Sutter made deals with the Nisip Women leaders in exchange for labor. While Sutter’s fort was reconstructed and made into a California State Park, nothing remains of the Nisipowinan village, and their graveyard, the largest Indian cemetery, is unmarked. There is no obvious plaque or marker that exists for this site. It is now a field with scrub bushes. (The Bill Beaver Project) This memorial chose to focus heavily on the European aspects of this site going as far as maintaining the European housing that overtook the Nisipowinan village while allowing the village along with its culture and tradition to fade away into nature. Keeping the site unmarked only furthers the message that this memorial is more about honoring John Sutter and European influence, than honoring the Nisipowinan people.

The Aztec Ruin National monument is actually a well-preserved example of Pueblo architecture in New Mexico. The site is a 900-year-old ancestral Pueblo Great house with over 400 masonry rooms. It still has the original timber holding up the roof, T-shaped doorways, and intact ancestral Pueblo rooms. This site also has a reconstructed Great kiva and in total is about a half-mile walk through the ruins. The site of the memorial is still enacted and preserved, but the monument misnamed the ancestral house. Early white explorers mistakenly identified the building as traces of Mexican Aztec culture, instead of the Puebloan people, thus the ill-gotten name of the site. (National Park Service) Even knowing this fact, the site as named on the National Park Service website remains the same as when the European explorers wrongly labeled the site. It begs the question if the site is invested in honoring the Pueblo society and architecture or simply interested in the ancestral house as a tourist spot.