America's Perception of the Rest of the World, as told by Monuments

There are many monuments built in America in honor of other countries and commemorating immigrants from those areas who settled in the United States. The United States became what it is today due to the influx of immigrants from all over the world, so it is not surprising that the country would want to pay homage to their roots. Monuments that are dedicated to other countries and immigrants from those countries are often built to foster international connections, but the monuments that are built can often reflect the biases held by the artist about their home country and foreign countries. America's ideas about other regions are evident in the way that other regions are portrayed in monuments, and they work to perpetuate these attitudes.

“The Four Continents” is a series of statues built by Daniel Chester French from 1903 to 1907. It is currently located outside the former US Custom House. It consists of four statues, all of a woman sitting on a chair of some type, to represent four of the continents: Asia, Africa, America, and Europe. Each woman and chair is styled in a way to represent that continent’s perceived role in a larger global community at the time of its construction. Europe’s statue consists of a woman sitting on a throne that is styled to look like a ship, with a globe and pile of books with her. She wears a crown and looks forward. She wears draping cloaks like the Ancient Greeks. There is an eagle perched on the chair behind her and an old woman wearing a cloak reading a book. This statue reflects how, at the time, Europe was seen as the disseminator of knowledge to the rest of the world. The throne shaped like a ship reflects how Europe spearheaded exploration into the rest of the world, and her outfit and eagle reflect their roots in the great, expansive Roman empire. 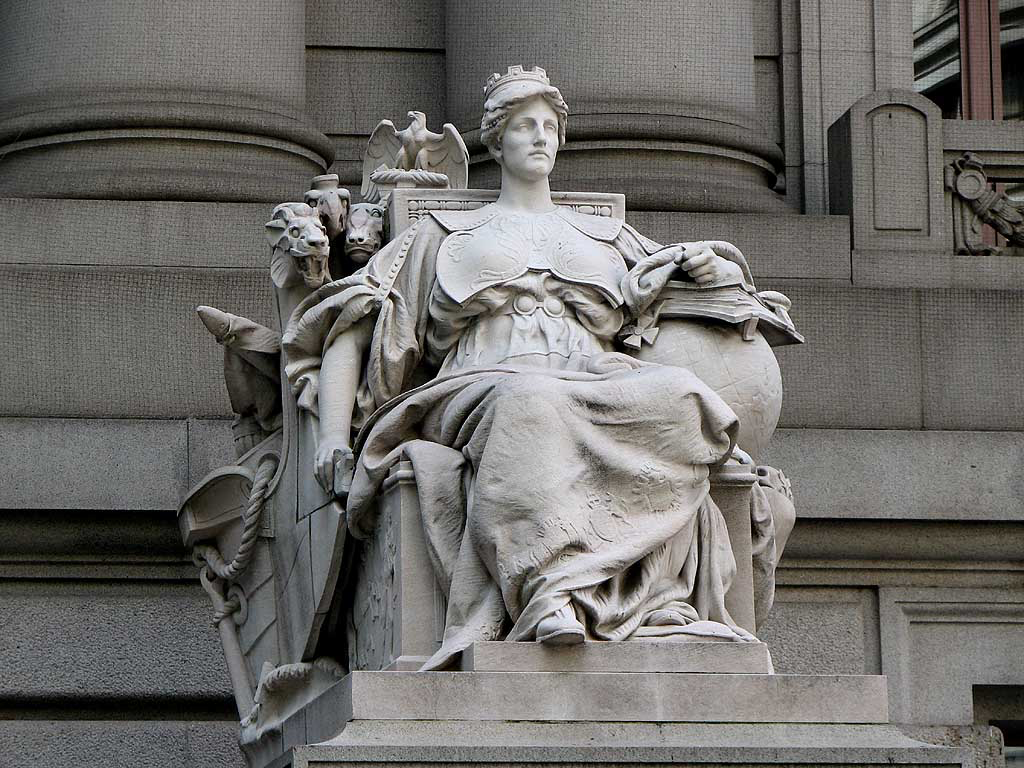 America’s statue depicts a young woman sitting on the edge of her seat, ready to spring forward if needed. She holds a torch and there is a bushel of corn on her lap. Her foot rests on the head of an ancient Aztec deity. Next to her sits a young man who holds tools and a small wheel. Behind her is a Native American in a full head dress looking over her shoulder. America’s statue is the only statue that appears to be in action, reflecting America’s tendency to be involved in various international affairs. Her foot resting on the Aztec deity also reflects the people who were slaughtered by the colonists who came to America. The Native American looking over her shoulder pays homage to the people who were there first. 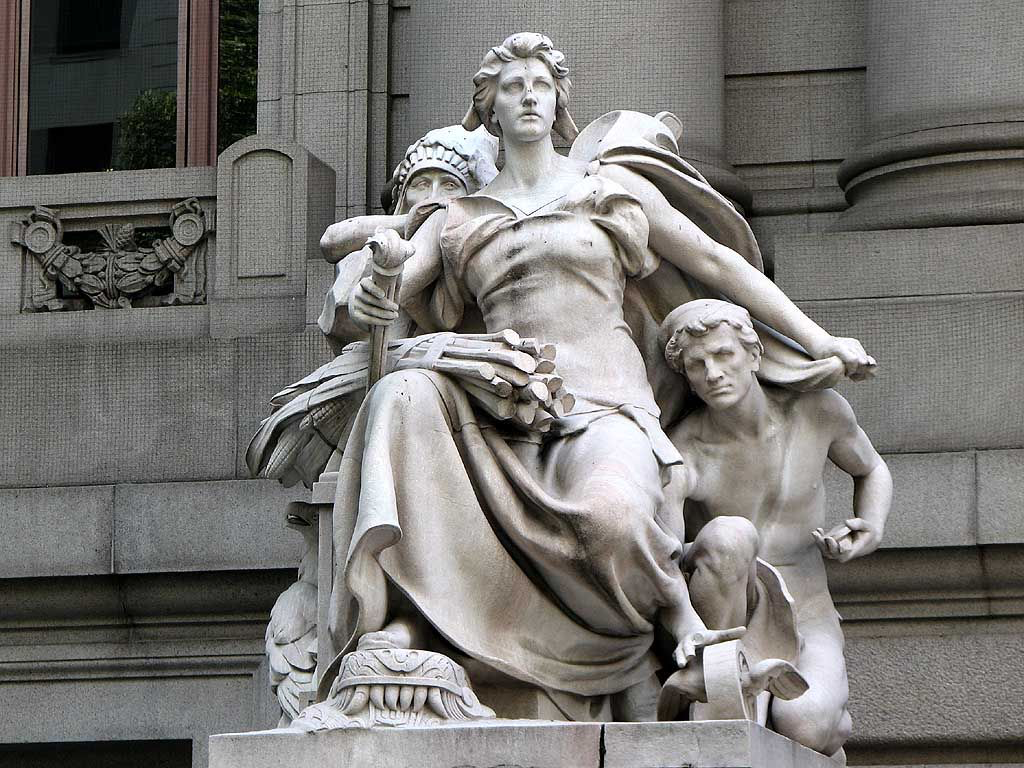 The statue representing Asia depicts a calm woman with her eyes closed and a little Buddha on her lap. She holds a lotus flower with a serpent wrapped around the stem. A tiger sits on one side of her with his back turned looking over his shoulder, and three figures sit on the other side of her: a boy kneeled in prayer, and old man with his hands tied behind his back in slavery, and a woman with a baby strapped to her chest. The latter two lean against the throne for support. This complex depiction of Asia represents how little the United States knew, as Asia was still a bit clouded in mystery during the very early 20th century. 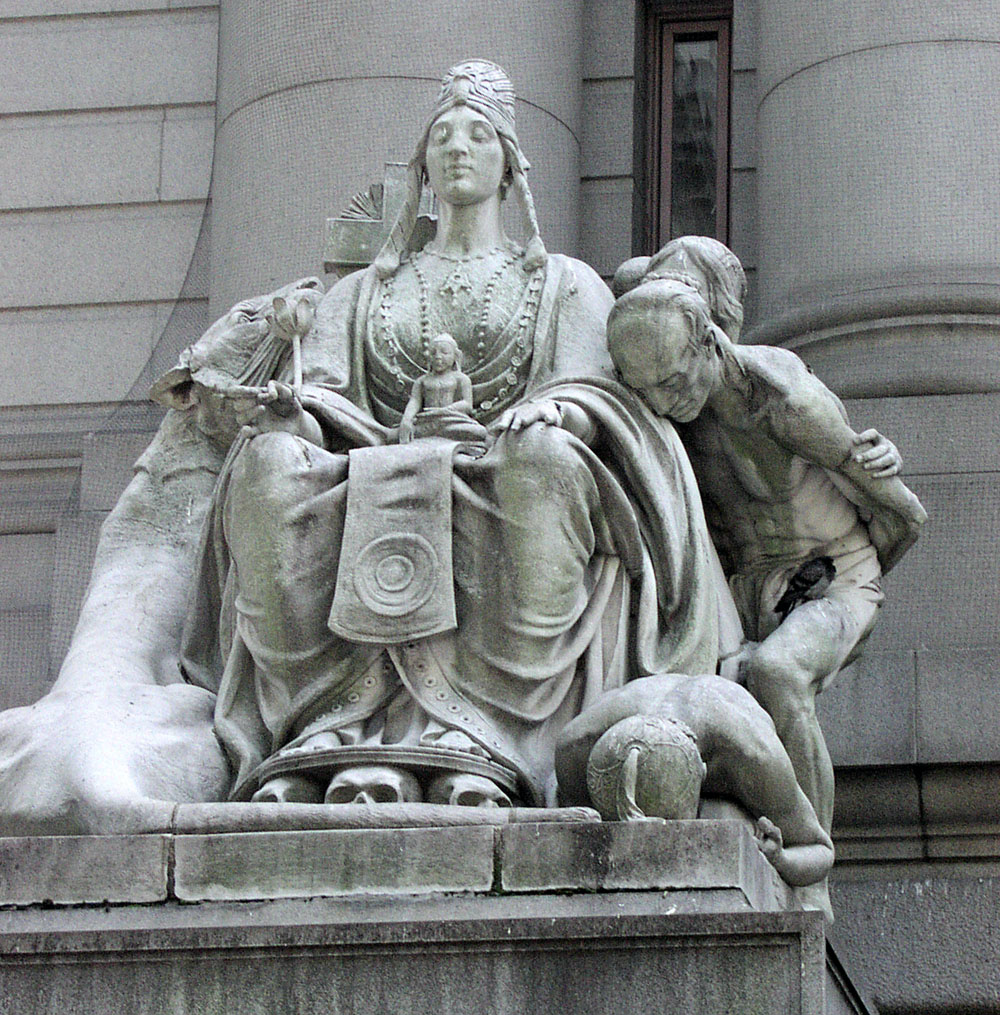 Africa’s statue is depicted as the “sleeping continent,” showing a tired, half-naked woman leaning against a crumbling sphinx. There is an unidentifiable cloaked figure sitting behind her. This statue represents how the United States viewed Africa as a mysterious continent who had yet to catch up with the advancements of the rest of the world. The crumbling sphinx represents the crumbling remnants of the ancient Egyptian societies. These representations of various regions of the world reflect America’s own biases towards herself and against other countries, and how the limited perspective of other countries has not changed quite so much since the early 1900s. 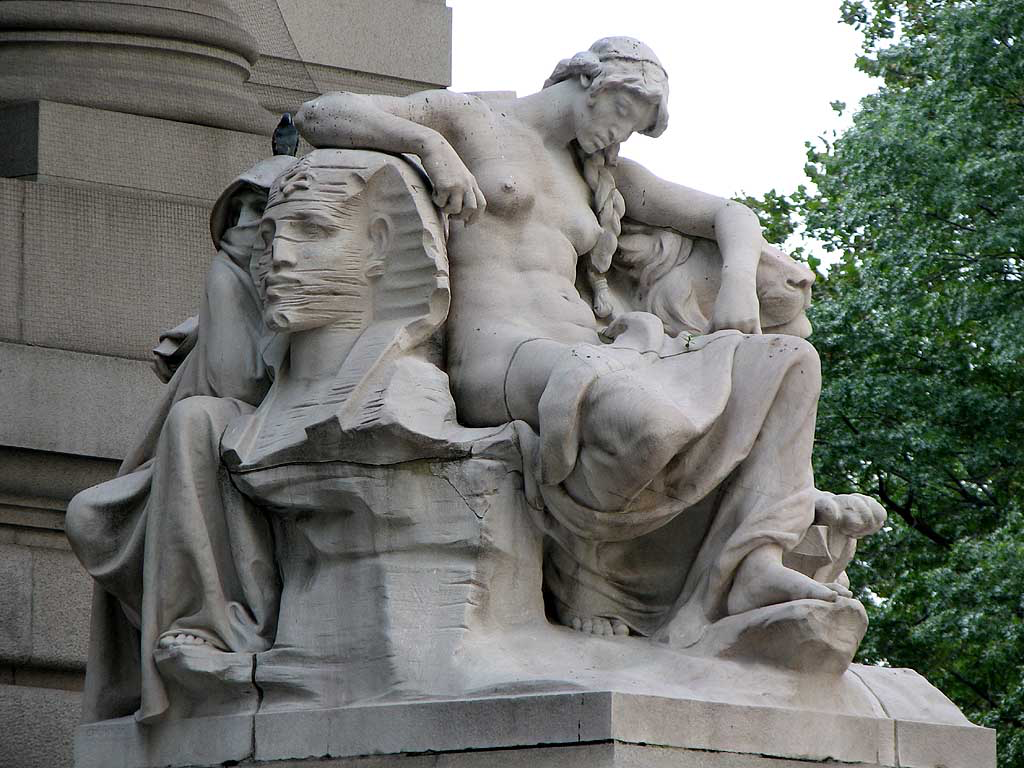 While these statues were not built for the purpose of honoring immigrants, they still play an important role in the narrative of America's relationship with other places and how they are depicted in monuments. America's perception of a region directly influences how they perceive immigrants coming from that region. For example, Europe is depicted as a disseminator of knowledge and a leader to the other continents. Immigrants from Europe, most notably during the colonialism era, beginning in the late 15th century, are most commonly honored. There is an entire holiday devoted to Christopher Columbus, the man who first 'discovered' this region for Europe. Up until only very recently, the day was devoted entirely to Christopher Columbus, but in recent years, the day has been rebranded in some areas to be Indigenous Peoples Day instead. For most of America's history, Christopher Columbus and other figures like him coming from western Europe have been idolized and celebrated. On the other hand, Africa and Asia are depicted in a vague, mysterious way, as America was less familiar with them at the time. Despite international connections growing faster now more than ever due to the advancement of technology, perceptions about other regions of the world have not drastically changed since this time. While Europe is depicted as a headstrong leader, Africa is depicted as something that needs assistance. The vast majority of immigrants from Africa did not choose to come here, they were forcibly relocated during the Atlantic Slave Trade. American structures and works continuously depict African countries and people as poor, malnourished, and needing assistance. This narrative and rhetoric has not changed much over time, as just last year, the President of the United States, Donald Trump, described South Africa as "a crime ridden mess that is just waiting to explode." America's attitudes around other regions has not drastically changed over time, and monuments built that depict those regions perpetuate these sentiments.

The Statue of Liberty was a gift to America from France given in 1884. The statue stands 305 feet tall, and depicts a woman wearing robes, holding a torch high above her head and a book in her other hand. She looks into the distance, facing Southeast, looking towards the ships entering the harbor. The plaque at her feet reads, “Give me your tired, your poor, Your huddled masses yearning to breathe free, The wretched refuse of your teeming shore.” 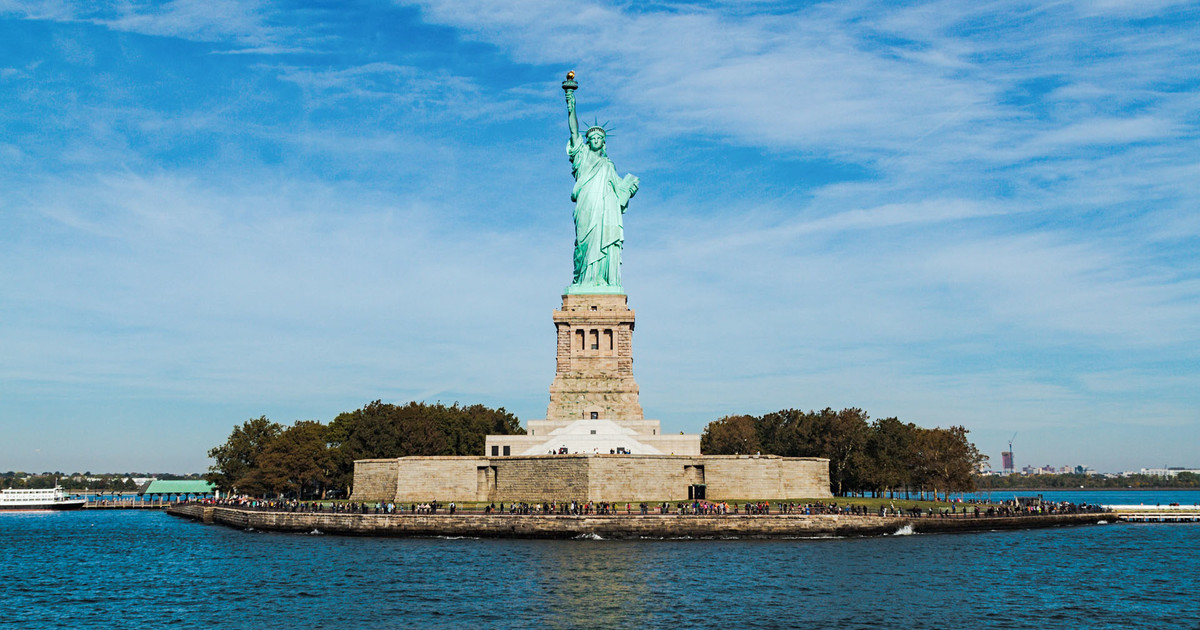 This statue represents the idealistic concept of immigration to America. At the time this statue was built and given as a gift, America was seen as the all-accepting promise land, taking in immigrants from all over the world to experience the United States, the new, vibrant, upcoming country. This attitude has changed since this statue has been erected, and immigration is now one of the country’s most controversial and divisive issues. The Statue of Liberty remains a symbol for immigration today, though the immigration experience has changed drastically. This statue is among many that remain timeless and iconic, but as the world around them changes, the message associated with them becomes more complicated.

“The Immigrants” is a statue located just south of Castle Clinton in Battery Park, New York. It was built in 1973, and depicts various figures from all over the world and from different eras in time arriving in America, including a fatigued worker, a priest, an Eastern European Jew, and a freed African slave. 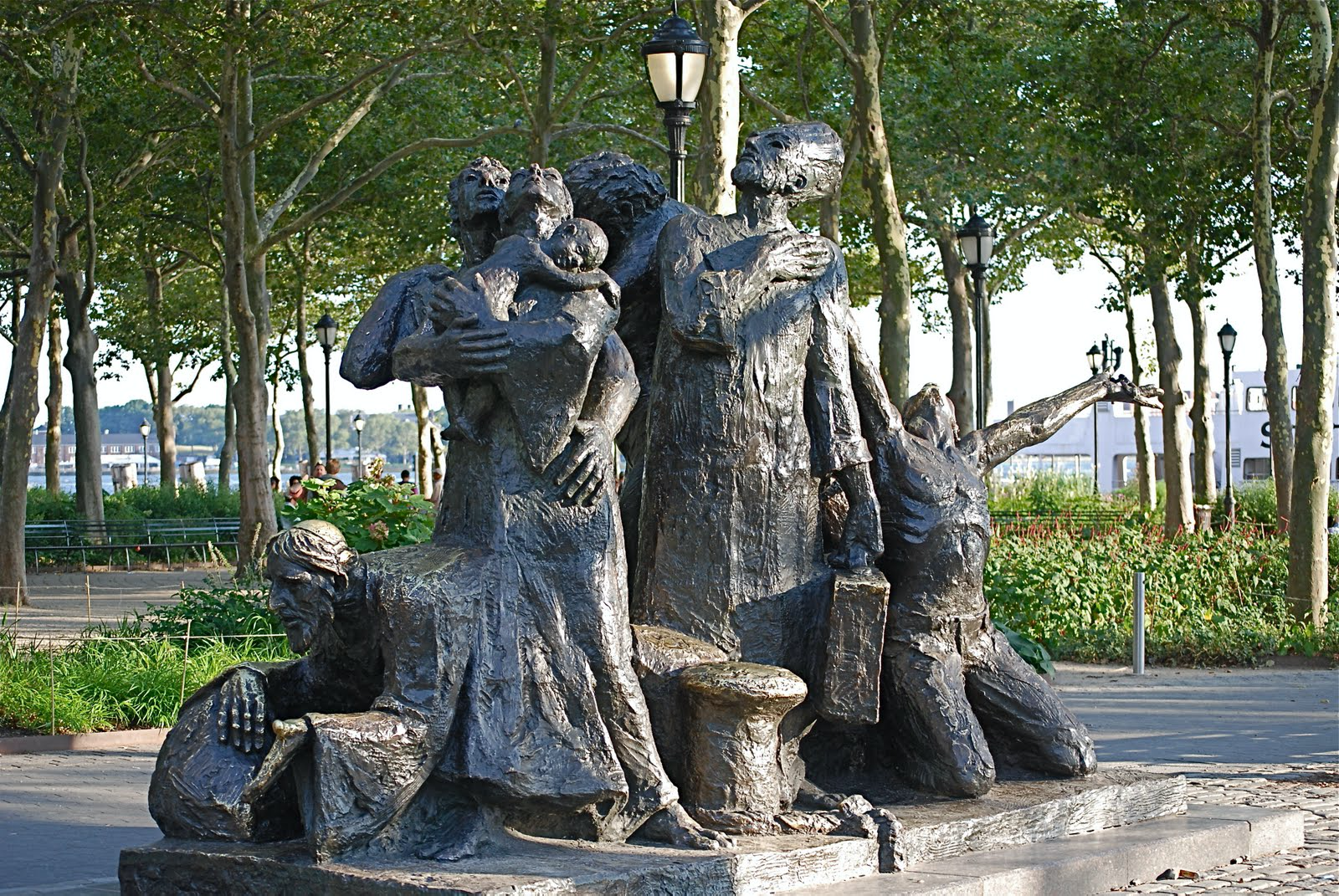 This statue depicts a more realistic view of immigration, as all the people, despite coming from different experiences all over the world, are joined together by one common experience: leaving one country for another, unsure of what the future might hold. The figures’ faces show their apprehension and exhaustion, which is a more realistic representation of the trials and hardships faced by people who immigrate elsewhere, no matter what time period they’re immigrating in. They also seem relieved to have reached America, the supposed “promise land”.

Throughout these various depictions of immigration and other continents, one thing remains the same: America’s depiction of herself as a savior who is ready at any moment to intervene. Given its history, America tends to be depicted as an opportunity, a freedom-land where anything is possible. Almost every group who came to America during the times that these statues were erected faced some sort of hardship and oppression, but America still wants to be seen as a perfect happy ending. Countries often only like telling the stories where they are the victims or the winners, and this complex is evident in these statues and how they depict America and fail to depict her shortcomings. Over time, America's perception of itself has remained a constant positive and strong belief in freedom. Its perception of other regions of the world also remains consistent, no matter how inaccurate or misinformed.